A 2014 Court ruling in Florida referred to the Intoxilyzer 8000 DUI breath test machine this way:

Yet, the Intoxilyzer 8000 continues to be relied on by Florida law enforcement and the State Attorney to produce evidence of impairment.

What Happens During a Driving Under the Influence (DUI) Stop (see more here):

Typically, a driver is pulled over initially for a civil (non-criminal) traffic issue such as speeding, failure to maintain a lane, or careless driving.  Once the traffic stop has been initiated, law enforcement is always looking for indicators of impairment. Signs of impairment cited by law enforcement usually include bloodshot, watery eyes, slurred speech, and the odor of alcohol on or about the person.  Once law enforcement has “reasonable suspicion” of impairment they transition a civil traffic stop to a criminal investigation for Driving Under the Influence (DUI).

The DUI investigation includes the law enforcement officer’s ongoing observations and evaluations of the driver.  Additionally, law enforcement will ask the driver to submit to a set of Field Sobriety Exercises (FSTs).  If law enforcement believes that they have enough indicators (or “clues”) of impairment they will make an arrest for DUI.

After the DUI arrest has been made, the law enforcement officer will ask the driver to submit to a Breath Test.  The breath test can be performed on the side of the road (using a handheld device not admissible as evidence), or more typically in a mobile breath testing vehicle or back at the police station or jail using the Intoxilyzer 8000.

In Florida, if the driver has a breath-alcohol level of 0.08 or more grams of alcohol per 210 liters of breath, and the person is driving or in actual physical control of a vehicle, the person is guilty of the offense of Driving Under the Influence.

Many drivers do not realize that a DUI arrest is made after Field Sobriety Exercises or simply with law enforcement officer observations if FSTs are refused.  The Breath Test becomes additional evidence for the State Attorney to use against the driver. (Please Note: This explanation is not intended to provide legal advice on whether or not to refuse FSTs or a Breath Test.)

Technical and Operational Background of the Intoxilyzer 8000:

samples for breath alcohol levels.  It is commonly used for forensic evidence collection in criminal traffic matters such as Driving Under The Influence (DUI).  A Defendant, suspected of operating a motor vehicle while impaired by alcohol, is required under the Florida Implied Consent statute to provide breath samples into the machine. 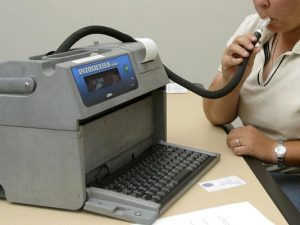 A Defendant required to provide a breath sample under the law is observed for twenty minutes by law enforcement to ensure he or she has not ingested or aspirated anything or vomited prior to providing samples which may affect the result.  The Breath Test Operator performs a diagnostic check on the breath testing machine before samples are taken, and after the last breath sample.  The operator instructs Defendant to blow into a tube connected to the machine and the breath sample is captured into a chamber. The Intoxilyzer 8000 then shines infrared light through the sample.  Chemicals, including the ethanol in alcoholic drinks, absorb light to varying degrees. The Intoxilyzer 8000 then uses an algorithm contained in the machine’s software/source code to calculate a breath alcohol content in a breath sample measured as grams of alcohol per liters of breath.  The machine requires two valid breath samples. The breath samples must be submitted within three minutes of each other for the test to be considered valid.

There have been numerous issues cited with regard to the operation and reliability of the Intoxilyzer 8000 in Florida.

Examples of issues with the Intoxilyzer 8000 from results in Florida include:

Incredibly, given the issues with the Intoxilyzer 8000, CMI has stated that they do not have any revision histories for any of the software versions used in the Florida Intoxilyzer 8000 machines.

Further, some offices of the State Attorney have refused to provide or assist in procuring the software/source code of the Intoxilyzer 8000 for defense counsel to inspect and potentially use in defense of their clients.

If arrested for DUI, a Defendant is required to take a breath test.  If the defendant refuses, they will lose the privilege to drive. The defendant is not allowed to consult an attorney

before being required to take the breath test.  In addition, a defendant’s refusal can be used against him or her  in criminal prosecution as a “consciousness of guilt.”

Due to the presumptions provided for in the Florida Implied Consent Statute, a breath test can be a devastating piece of evidence in a DUI trial.  Therefore, in DUI trials, where the actual operation of a motor vehicle is rarely at issue, but instead the indicators of impairment are at question, a breath test greater than 0.08 is tantamount to telling the jury to convict the defendant.

The Court in the above-referenced case determined that “the driver is entitled to know everything about the device is open to inspection and analysis that will assure the most hardened skeptic that its reading is true, accurate, and reliable.”

Issues with the Intoxilyzer 8000 and other similar breath test machines have recently been highlighted by the New York Times in their article entitled, “These Machines Can Put You in Jail. Don’t Trust Them.”

The issues with breath test machines are not limited to Florida alone.  Judges in Massachusetts and New Jersey have thrown out more than 30,000 breath tests in the past 12 months.  In Washington, D.C., the attorney general’s office determined that 350 people had been convicted based solely on results that were far too high given faulty breath test machines.

What Can You Do?

Breath test machines including the Intoxilyzer 8000 should not be relied upon as the sole arbiter of guilt given all of their documented issues, but they are used exactly as such.

If you have been arrested for Driving Under the Influence (DUI) in the Tampa Bay area including St. Petersburg, Tampa, Clearwater, Largo, and the surrounding counties of Pinellas, Hillsborough, Pasco, Manatee, or Sarasota, call the Morris Law Firm for a strategy session on your case.  Call (727) 592-5885, Option #1 for New Clients.